I'm still kind of stressing about how much time I have left to get things done, but in the grand scheme of things, there's just not that much left to do. It's all tricky stuff that will be time consuming, but the costume is mostly done.

And really, that's it! But the last one is a doozy. The front has circular cutouts which are supposed to be trimmed in the same color trim as everything else. I bought bias tape for that, but I have no idea how it's going to work out yet. I've been putting that off for now :P 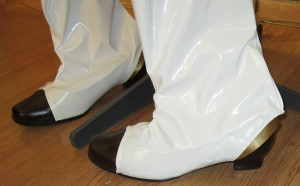 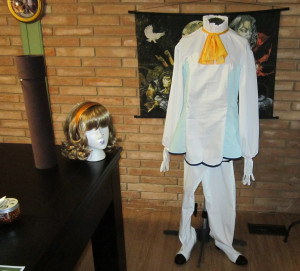 The boots are starting to look pretty good! It is a mystery to me as to how to get a snug fit on the heel. Even when I'm careful about drafting my pattern, there's always a little extra at the heel like that. (Note.. it only happens on shapes where I need a heel cutout, like here and on Rita.. another Tales costume! Go figure!) I may go from the inside and pinch it in and see if that looks good. Otherwise, I'll just leave it as-is and call it a speed vent :P

Today, I hope to get some more done. I still haven't heard back from Bernina on that ruffler foot I ordered, so I'm starting to loath the idea of having to make like.. at least a yard of box pleat ruffles by hand. The bit I did for the collar felt like it took forever already! I think I can leave those until the end, since they'll just need to get basted on top of the strap. I'll probably call Bernina in a few days and ask about it. I'm thinking about taking my machine back in, too, since the tension seems kind of wonky. I have to have it set on 7 for a half decent stitch, and it's supposed to be able to function on 5. I still have enough sewing to do with it that I can't just leave it at the repair place :( I need to at least finish the tunic, the quiver strap, and the boot cuffs! Wait.. that's everything :P
Collapse