ONTD_political posted about the whole wacky Chick fil a thing, and I saw an amazing video.

For those who haven't seen the news yet, apparently the CEO of the restaurant came out against gay marriage.. then some other politician dude called for a Chick fil a rush. Those against gay marriage flooded the fast food chain and (in some cases) wiped them out of food.

Since then, it's been really controversial!

Edit: My opinion on the whole thing? I don't like going into political stuff on my journal because I'm really bad at explaining my beliefs and backing them up. Read up while you can, because this is probably only one of a very small handful of times I've posted anything remotely serious about national events on here.

Basically, I think people should be able to love whom they love without any grief from anyone else.. If they love someone enough, they should be able to make that lifelong pledge and receive all the economic benefits of that union. I'm a little torn on the whole "marriage" thing, because to me, that's an issue of church vs. state. If the church is going to "claim" the term marriage, then legally, all couples, no matter what the makeup, should be called "civil unions" in the eyes of the government, and NO ONE should be married on govenrment forms. The terminology just seems like sematics to me. We SHOULD strive for that division of church vs state, but it's all been mucked up together since the creation of the country, so I doubt we'll ever see that. It's like striving for impartial journalism. lol So.. I will continue to define "marriage" as a lifelong pledge of love between two people that has been declared and aknowledged in public, and confers certain rights to the two individuals. And I think any two people that love each other (that are of legal age :X) should have the right to that.

I also really love the chicken at Chik fil A XD Fucking chicken biscuits, man! I did not go there on crazy hate support day. ( I didn't find out about crazy hate day until yesterday, when it was already over?) I also haven't been in like 5+ months because I am dieting and staying away from drive-thru. So to me, right now, it's an easy choice not to go. Morally, I'm really not sure where I stand on the whole Chil fil A thing. It all seems a little silly, but the fabulous drag queens tell me it's ok to eat chicken :P I wouldn't want to knowingly support a company actively contributing monitarily to a hate campaign. I am not sure what message I would be sending by eating a chicken sandwich, and frankly, it's not something that crosses my mind. Somoene could go crazy thinking about what their purchases are saying about them politically. Shit. Am I supporting the KKK by buying those white Always pantyliners? I can't be bothered to sit and think about every little thing like that! When there's some massive hate event, though, the choice is easy for me.

So there you go. A really awfully explained section on why I think gay marriage is A-ok, and how I love chicken and don't think feminine napkins are racist.

I took a picture and uploadeded it, but forgot to add it to my post! I was too distracted by drag Wilson Phillips. I should have the finishing work on it done today, then I'll get to work on boots or the tunic. It's pretty plain so far, but it'll look more interesting with the wrist ties and jabbot. I think I may end up with some extra buttons after they all trickle in, so I may use leftover tunic buttons for the collar and wrist bands. If not, I have some fancy looking gold buttons leftover somewhere that would look nice. It doesn't matter too much, since they'll be covered up anyway. Just like how it doesn't matter how I finish the bottom hem of this shirt, since it's getting tucked into leggings and covered up by a tunic. lol 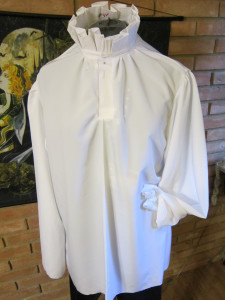